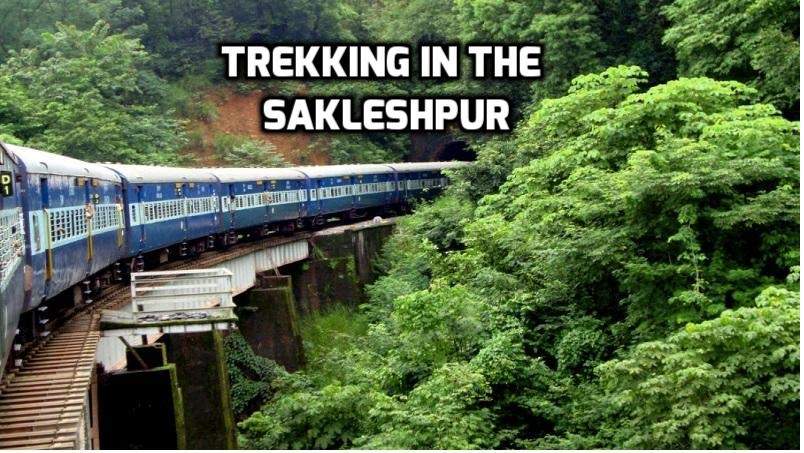 Sakleshpur or Sakleshapura  is a hill station town and headquarters of Sakleshapura Taluk in Hassan district in the Indian state of Karnataka.

Trekking along this route no longer possible, as train services have resumed since 2007.

The Green Route “Trek on the Railway Track”, is a stretch of track from Sakleshapur to the Subrahmanya railroad station, which was suspended in 1996 to convert the gauge from meter to broad gauge. In the 2007 the train service was commissioned and nowadays many people use the train to reach Donigal.

This track, that traverses some distance of the Western Ghats, had been abandoned, but now the track has been converted to broad-gauge. It forms a part of 56.80 km stretch from Sakaleshapura to Kukke Subrahmanya, dotted by 58 tunnels, 109 bridges and about 25 waterfalls. Since 2005 goods trains are carrying freight to/from the Mangaluru Port. It is recommended to trek after monsoon season i.e. during October. The passenger trains have started plying on the route since 2008. Currently, there are two passenger trains running on this route, one from Mysore via Hassan(daily), and another from Bengaluru, via Tumkur and Arasikere(alternate days).

The town itself makes for a pleasant halfway stop for travelers along National Highway 48—being the apex town in a long trail of road beginning in Bantwal near Mangalore, winding its way up the Western Ghats. As such, the town is often swathed in mist as the cool temperate surroundings are met with warm air from the coastal lowlands. The exit highway is equally picturesque with tall hedges lining both sides of the road, enclosing coffee groves within.

The Manjarabad Fort was constructed by Pallada dore its a jail after Tippu Sultan accrued and invigorated this. It is located on the outskirts of Saklaeshapura on NH48. It has a star-shaped fort, with a hillock in the centre and eight corners.

The climb to the hillock in the centre is difficult, but offers superb views. There is a hollow entrance in the centre, which is said to the entrance of a tunnel leading to Srirangapattana near Mysuru. Jenukal gudda is the third highest peak in Karnataka, located at Maragunda 24km outside Sakaleshapura. There is an mural with the fort’s map at the entrance which is in excellent condition. The fort is maintained by the Department of Archeology

Raxidi Estate is around 1000 acre land of coffee estate in the city of Sakaleshapura. It has a temperate climate surrounded with lofty green hills full of coffee, cardamom & pepper. Large timber yielding trees such as Rose wood and Jack trees provide shade for these coffee bushes. The sub-tropical climate and heavy rains during the wet season create an environment where several unique plant and animal species flourish.