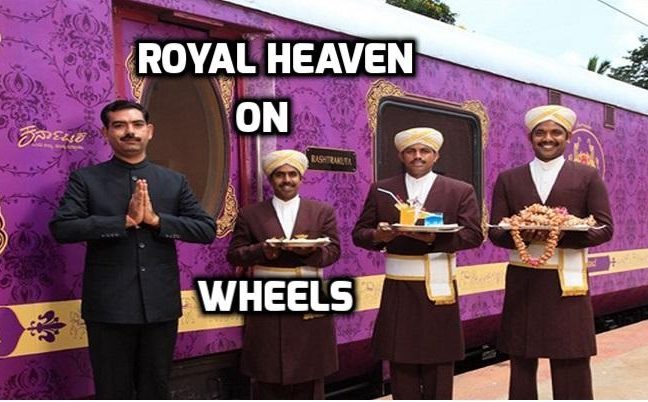 The Golden Chariot is a luxury tourist train that connects the important tourist spots in the Indian states of Karnataka,Goa,Kerala & Tamilnadu as well as Pondicherry depending on the selected itinerary.

Golden chariot is named after the Stone Chariot in the Vitthala Temple at Hampi.

The 19 coaches on the train are coloured purple and gold, and sport the logo of a mythological animal with the head of an elephant and a body of a lion.

The train, along with the Deccan Odyssey, is designed on the lines of the more popular Place on Wheels with accommodations, spa treatments and dining.

Golden chariot has been awarded the title of “Asia’s Leading Luxury Train” at World Travel Awards, 2013. The train is operated by the Karnataka State Development Tourism Corporation and The Maple Group handles the hospitality services on the train.

Southern region of India is known as one of the ancient cradle of civilization where several dynasties flourished. There is so much to be seen, witnessed and experienced in South India which may leave even the fussiest of travelers breathless. Designed to showcase the diversity of the South Indian states in shortest feasible time to those who prefer to travel in exclusivity and luxury.

Pride of the South

Pride of the South tour is a 7 nights and 8 days itinerary during which several tourist places in Karnataka are covered. The destinations covered during Pride of the South are Bengaluru (Day 1), Mysore (Day 2), Nagarhole National park (Day 3), Hassan,Belur and Halebidu(Day 4), Hospet and Hampi (Day 5), Aihole, Pattadakal and Badami(Day 6), Goa (Day 7), and back to Bengaluru (Day 8).

Splendor of the South

Golden Chariot features two multi-cuisine restaurnats Nala and Ruchi. Serving a buffet spread of vegetarian and non-vegetarian cuisines. The names of both these restaurants draw inspiration from the Indian mythological texts and their interiors are reminiscent of Halebidu and Hampi architectural style. While Nala was a legendary king and a chef in the days of Mahabharata, Ruchi is a Sanskrit word meaning fine taste.

The on-site lounge bar “Madira” is stocked with an assortment of international wines and spirits. The interiors of this lounge bar draw inspiration from the aesthetics of the Mysore palace.

The conference car on board the Golden Chariot offers a seating capacity of 30 guests in all. The car is equipped with modern technology such as 42 inch LCD television, and audio-visual equipment.